I'm sitting here at my desk in shock. I know the world continues to spin, and that people will still be themselves, but I'm sorely disappointed in my country. America. My web address, americanhorrorwriter, both .com and .net, were my pride. I chose them because America was the land of the free, home of the brave, land of equality and tolerance. Now... I'm heartsick. I'm ashamed of being an American. I'm ashamed at my home state, Texas.

Not surprised, mind you. Just ashamed.

I'm both surprised by, and ashamed of, my adopted state, Pennsylvania.

We lived, for eight years, with a great man at the helm of our country. Love him or hate him, disagree if you must. We made strides toward peace, toward equality, and toward leaving behind a world our children could be proud of. In one night, the people of the USA brought all that to an end.

Here's what we are going to lose:


Do you realize what you've done?
A man who has no regard for the "sanctity of marriage" is now in charge of defining what that means. Your mothers, sisters, wives, co-workers and friends no longer have any control over their own bodies. Ready to retire?  Tough shit. Social Security and Medicare won't be there. And your children? They'll inherit a world that grows progressively hotter and is running out of resources faster than you can believe. And those of you who want to rise above your past through education? You're stuck. Education is about to be gutted too, which means that we will become a nation overrun with ignorance.
For the first time in my life, I accept no blame for this. Why? Because I voted. I encouraged people to vote. I voted in the primaries and made my voice heard. I actually read the issues instead of trusting the sound-bytes that were screamed on television. I saw what this walking pile of excrement was, and voted against him.
But you...
Who's to blame? You who followed the advice of certain nihilistic people and didn't vote because "it doesn't matter anyway" or because it was your way of protesting an imperfect system. You now will live in the future you made. Your complaints over the administration or even the system are null and void, a bullshit argument about a system you couldn't be arsed to change. Scream all you like. You did this.
You who voted for a third party, as was your right... Take a look at the numbers. Notice how the percentages by which the walking cheeto got elected are the numbers which your not-a-chance-in-hell candidate got? I get it... No single snowflake feels responsible for the avalanche. But you are.
You who scream "but Hillery is worse!" Do you really mean that? Worse than a child rapist? Worse than the man who bankrupted all of his companies while covering his own ass? Worse than the man who molests women and says the minorities in this country are the cause of all the evils? Because if you really believe that, you didn't actually read about the candidates, did you?
You who actually voted for Trump, you should get down on your knees and beg forgiveness of your mothers, daughters, friends that aren't white, and the rest of the country that you've hurt. You should beg forgiveness, and be prepared when it will not be given.
To all my friends who are women, to my daughters, to my wife, to all my friends who aren't white, who aren't Christian, and to all the members of the LGBT community... I'm sorry. I still support you. I stand beside you and will hold you up when you get knocked down. I will defend your right to happiness and to choose what you do with your own body and what consenting adults do in the privacy of your own home with my dying breath. I pledge, now and forever, that I will stand beside you.
It sounds like a hollow promise, I know.  After all, I'm a white male. I'm privileged. I know it.
But I truly believe that America, MY America, should be a place of equality. I truly abhor racism and sexism and discrimination and subjugation of any kind, even though some times I'm blind to it. I'm thankful to the people who point it out to me because only through awareness and education can we truly fight it. And maybe I sound naive. Maybe I sound like a SJW or hopelessly deluded. But I, the individual, do not want my children, or their children, to grow up in a world where people are discriminated against because of the color of their skin or for any other reason.
How can we fight this? Education. Why do you think he wants to gut education? Because the more educated we become, the more we actually think, the more we will begin to question his motivations. The more we will evolve into a more enlightened species. The more we will come to realize that discrimination for any reason is wrong.
There's a thing going around right now that's a quote from a comic book. I'm posting it here. 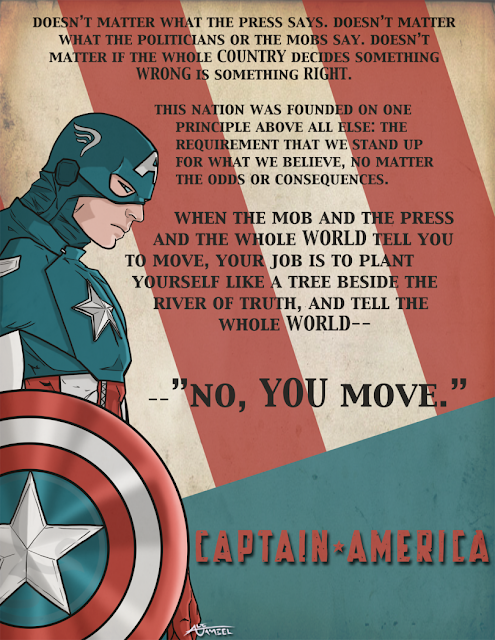 So here it is. These words are not mine, but I hold them dear. We hold these truths to be self-evident, that all men are created equal, that they are endowed by their Creator with certain unalienable Rights, that among these are Life, Liberty and the pursuit of Happiness.
So the question is this:  What do we do now?
I have one solution. Everyone who has something against Trump, everyone ever molested, touched, groped, robbed, cheated, or destroyed by him, stand up. Get him in front of the court. Have him federally indicted. Send him to the big house before the white house. Please.
To all my friends, I love you. To the people that will lose their rights, I love you. I'm sorry. We will overcome this. We have to. We have to be better than this.

Scott A. Johnson
There are three blogs from which you can choose. The first is Strange Words, a blog of writing advice. The second is Personal Horrors, a tour of personal, sometimes painfully so, things going on in my life. The third is Tabatha L. Johnson, a blog that I left up as a tribute to my deceased first wife and her struggle with cancer. Choose wisely.

Other Blogs of Mine